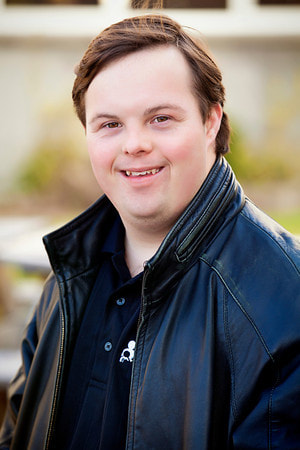 ​Born with Down syndrome, 27-year-old David DeSanctis is very bright, communicative, and aware of his disability. A Ballard High School alum, a graduate of the University of Louisville/Jefferson County Public Schools P.A.C.T. program (Providing Access to Community Transition), and Jefferson Community and Technical College program, College Connections. He is active with Down Syndrome of Louisville, Special Olympics, Louisville Adaptive Rowing, Angels in Disguise, and Best Buddies.

David had the opportunity of a lifetime to generate awareness and understanding when he was cast as “Produce,” a lead role in the movie, Where Hope Grows. Released in 2014, the film focuses on what it means to belong. Produce and the other leading character, Calvin, develop a friendship that gives Calvin’s life new meaning and purpose. Through the long hours on the set, David learned a lot while teaching those around him about tolerance, friendship, and acceptance.

David became interested in acting and broadcast journalism in high school. When the producer of Where Hope Grows came to Louisville, people from several organizations suggested he meet David. David did the rest, competing against well-established and experienced actors, landing the role, thanks to his hard work and passion. He learned lines quickly and adjusted to grueling hours, and it all paid off. When you watch the movie, David isn't David – he's Produce. He brought the character to life in a way that only he could have. David has approached post-production and marketing responsibilities with the same work ethic and passion, using his opportunity of a lifetime to help others.

Since the movie release, David has traveled extensively to speak to groups and fans about his experience with the movie as well as bigger topics like friendship, achievement, and acceptance. What started out as a personal dream for David has turned into something much bigger as he continues to help create communities where everyone is appreciated.